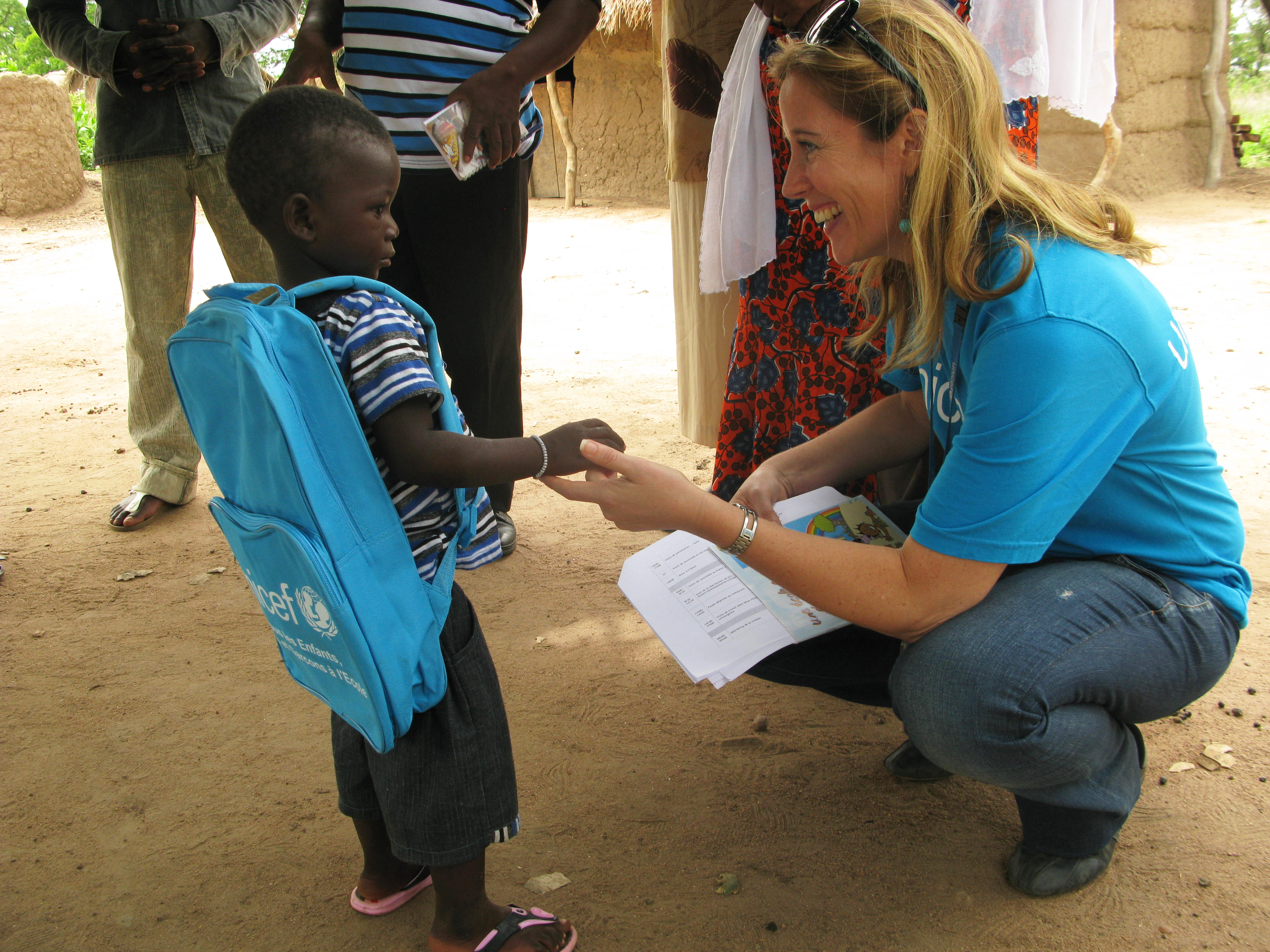 Women and Children Build Peace in the Ivory Coast

Dr. Angelica Ponguta: Christina De Bruin is a representative in UNICEF Ivory Coast. She has worked for UNICEF for more than 13 years in headquarters and Sri Lanka, Ethiopia, Senegal, and the Ivory Coast. Prior to that, she worked for 5 years at the Ministry of Foreign Affairs in the Netherlands. She holds a bachelor’s degree in European Human Rights Law from the University of Professional Education at the Hague and a Masters in Public Policy and Public Administration from the University of Liden. Christina is married and as a beautiful little daughter of two years so we are delighted that she is here today to talk to us about a topic that is very close to her heart: early childhood development.

Welcome, Christina, and thank you so much for joining us.

Christina deBruin: Thank you very much, my pleasure to be joining you.

Ponguta: Wonderful, so as you know we are here to talk today about the work you have been leading with respect in particular to peacebuilding through early childhood development in the Ivory Coast. But before talking about the programs and the initiatives themselves or in particular, let’s talk a little bit about the context of where you work. We do know that the Ivory Coast is recovering from a decade of conflict and political crises. So we would love for you to tell us from your perspective what have been some of the most significant impacts of the conflict, in particular on families, young children, and communities in that country.

deBruin: Indeed, Côte d’Ivoire, Ivory Coast, is characterized by a decade long social-political crisis and a conflict situation which ended in 2011 and which impacted severely all the social services sectors in the country. At the moment, the country is recovering and the government is politically highly engaged by becoming an emerging country by 2020. However, many of the root causes of the conflict have not yet been fully addressed. Social cohesion is still a challenge in some of the areas in Côte d’Ivoire. And if we are looking at the impact of the crisis, we are seeing that the crisis has damaged somehow the social fabric of different communities. Communities living previously in anxiety not being able to trust each other, tensions within the different communities, but also tensions over land, issues of resources, and questions of identity, the so-called ivoirité, as we say in French.

As I mentioned, still today some of the root causes of the conflict remain unaddressed and of course this situation has had an impact on families and children. First of all, the different displacements of children and of whole communities has an impact on children’s development who are not able to access education because during this crisis a lot of the schools were closed so schooling was interrupted in the western part of the country and Abidijan, where the crisis was at its peak. And of course when we are looking more closely on the impact of violence and conflict, we can see violence and conflict can have irreparable damage on young children itself, on their developing brains, because as you know violence produces, and also conflict in general, high levels of cortisol, a hormone that react to stressful situations. But if we are seeing this over longer periods of time, so a prolonged exposure to conflict and violence, it can cause toxic stress and that can really disrupt brain development of children while they are growing up in these stressful situations.

Ponguta: So certainly a very challenging context to work in. So in light of this complexity, on a sociopolitical and community level, we do know that the Ivory Coast’s UNICEF office is pioneering an initiative that aims to promote peace through an innovative early childhood development program. Could you please tell us more about the program, in particular how was it conceived and what are its major goals?

deBruin: So indeed, UNICEF in Ivory Coast, in Côte d’Ivoire, has worked over the last four years with different partners across Côte d’Ivoire on a program on education for peacebuilding. And this program was part of a UNICEF global peacebuilding education and advocacy program, also called Learning for Peace, supported by the government of the Netherlands. And this program globally was implemented in fourteen different countries that were fragile or in post-conflict situations. There were five main overall goals globally of this program to really increase the inclusion of education into peacebuilding and conflict reduction analysis and implementation. Secondly, to look at the increase in institutional capacities to conflict sensitive education. Thirdly, looking at it from a community point of view and to increase the capacity of both children and parents and teachers to prevent and reduce conflict and further promote peace. And fourthly, a broad objective was to increase the quality and conflict sensitive education that contribute to peace. And then an important element as well was to look at generational evidence and knowledge in programming related to conflict, peacebuilding, and education that can further a lot of the key stakeholders that are working in this area.

Ponguta: So all very, very important goals. So I just want maybe to get back to a couple of them. As we understand it form what you have told us and what we’ve learned about the program, one of the aims is to engage parents and the community as well as to promote ethnic and social unity and cohesion. So could you tell us a little bit about how the program tries to achieve these goals specifically and what have been some of the challenges and enablers to achieving particular community and parent engagement.

Ponguta:  Well it is truly remarkable how the program is transcending and reaching families and communities. But let’s talk a little bit about the children themselves. How does a program promote or does it try to promote values of peace, unity, inclusion and cohesion among young children themselves?

deBruin: Perhaps just to mention as well there have been quite some challenges as well because initially these women’s groups were often non-inclusive, reaching only one particular ethnic group within a community. And on top of that, the social norms within those communities also limited women’s ability to really speak out on some of the peacebuilding issues with their neighbors and within their community. So there were clearly challenges in the beginning to bring together different women’s groups that were inclusive and were consisting of different ethnic groups.

What we have seen that they were uniting around simple day-to-day interactions and especially around children’s wellbeing, This created a huge driving force for the women to come together. We saw that of course all the different mothers from different ethnic groups all have a very powerful enabler that brings them together and reaches the common goal of child wellbeing. So a group of mothers whose common interest to really secure and get good quality care and education for their children builds that kind of trust and friendship with one another, which as I mentioned then also influenced further their husbands, families, and the community members to do the same.

Ponguta: Great, I think it is extremely important to again highlight the efforts of transcending through the family unit and different ethnic groups. It’s something that really makes this an exemplary program in many different contexts. Now let’s sort of take a step back and I really want you to voice your opinion on a broader issue and it is very straightforward. How do you think investing in early childhood development can actually lead to peace or peacebuilding?

deBruin: I think this is a very good question. I think what we have seen on small-scale from this program through seventeen early childhood centers in the western part of Côte D’Ivoire is that if we are able to a safe, loving, and caring environment for young children, it can really help build for children also in the long-run the foundation for the ability to trust and build relationships with others while they are becoming adults. And this is also shown recently by research where an enabling environment during the early years of a child can help the ability of children to build these close, connected relationships with others. And this includes also strengthening the capacity of mothers and fathers to promote positive discipline and social learning. So by promoting these positive attitudes and skills for children, early childhood development through interactions from child-to-child and through play, children can develop these positive behaviors such as cooperation and managing conflict at a very early age in a nonviolent, peaceful manner.

Ponguta: Terrific, thank you for highlighting these very important connections. I think to conclude, we want to learn a little bit about what is next for the early childhood development program in the country. Is UNICEF aiming to take this model to scale and, if so, can you share some of the strategies may successfully lead to the program’s scalability?

deBruin: This program really started as I mentioned initially as a gender-sensitive initiative. But then the program really matured to the more gender-transformative initiative, empowering women to lead dialogues around social tensions and to ultimately reconstruct a little bit the social fabric within their community. So it started off as really within the context of the education peacebuilding program. What we have seen is that the government of Côte d’Ivoire and the Ministry of Education has really taken ownership of the program and it has now become a program-wide approach within the education sector. So for UNICEF, our goal is to scale up the early childhood development coverage within Côte d’Ivoire because it is still a very challenging context with very few ECD structures existing. If we are looking at percentages in Côte d’Ivoire, pre-school enrollment rates are only at 4.5% and there are significant disparities if we are looking at rural and urban access. For Côte d’Ivoire and UNICEF it is important and we have this ambition to go to scale. And we have recently a costing of different ECD policies but also a learning assessment which will allow us to build on and create some clear evidence, which will provide key advocacy for other partners and to bring other key partners and stakeholders on board in order for us to go to scale. So we have sought already collaborations with different other stakeholders in Côte d’Ivoire. For example the French Agency for Development has shown a keen interest but also some leading private organizations such as the Jacobs Foundation and the Bernard van Leer Foundation are very interested in looking at some of the good practices of this program. And of course it’s important for us in order to go to scale that we have key alliances with some of the key partners on early childhood development and the education sector. So the program, which started small, really gave a new opportunity to make a positive difference for children at an early age in Côte d’Ivoire and, personally, I’m very excited about the different partners that we are seeing that are very motivated and passionate to join us in this goal.

Ponguta: Terrific. Well, Christina, thank you so much for sharing this truly exemplar program. We wish you and your team the best in the time to come and we will continue to follow the progress and hopefully the expansion of these and other models that you are again pioneering in the country.