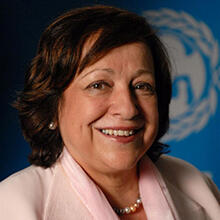 Rima Salah, Ph.D., served as a Member of the United Nations High-Level Independent Panel on Peace Operations (2014-15), and as the Deputy Special Representative of the Secretary-General, U.N. Mission in the Central African Republic and Chad (MINURCAT). In addition, Dr. Salah has had a distinguished career with UNICEF. Her service includes: Deputy Executive Director for UNICEF (2004-2007, 2011-2012), Regional Director for West and Central Africa (1999-2004), and UNICEF representative in several countries including Vietnam, Burkina Faso as well as head of office in Queta, Pakistan.

As a highly effective advocate for the rights of children and women in armed conflict and post-conflict situations, she contributed to Security Council (SC) Resolution 1612 on child rights violations and Security Council (SC) resolution 1325 Women, Peace, and Security. Dr. Salah has received many awards of distinction from several non-governmental organizations and U.N. Member States, including the French Legion of Honor, and the 2021 Peacemaker Award from the Center for Peace and Conflict Resolution at the J. Reuben Clark Law School at Brigham Young University.

In October 2015, Dr. Salah was elected to Chair the newly formed Early Childhood Peace Consortium (ECPC) of which Yale is a founding member. The ECPC, launched at UNICEF HQ in September 2013, brought together leaders from international organizations, academia, practice, philanthropy, networks media and development.

Dr. Salah is Volunteer Faculty at the Child Study Center, Yale School of Medicine. She is co-editor of the volume at MIT Press, Pathways to Peace: The Transformative Power of Children and Families.

"There is no better time than now to unite our strengths to change the tide of violence and build a peaceful world for all of us and the generations to come. We are accountable for the millions of people that have lost hope in humanity and in our future."
Rima Salah, PhD, Chair of the Early Childhood Peace Consortium, Former Assistant Secretary-General of the United Nations and Former Deputy Executive Director of UNICEF