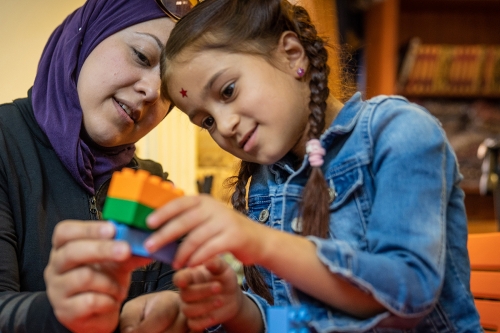 New York, NY—ECPC partner organization, UNICEF along with the LEGO Foundation held a United Nations General Assembly High-Level Side Event entitled "Early Childhood Development in Emergencies – What’s New? " on 23 September 2019. The event aim was to put early childhood on leaders’ agendas as a critical window of opportunity to invest in young children and their caregivers, and to provide concrete examples of early childhood development (ECD) interventions in crisis situations that can have both immediate and lasting impact in the protection and advancement of child rights.

The UNGA 74 event, held at UNICEFs Danny Kaye Visitor Center, drew a packed audience, consisting of partners who had been rallied from the business community, governments and non-government organizations (NGOs) around the urgent need to invest in nutrition, education, health and protection for children in emergencies.

Distinguished speakers showcased the rational for and best practices in Early Childhood Development (ECD) in crisis contexts, in order to highlight the need, galvanise support and encourage investments in this critical area. They stressed the importance to leverage the power of partnerships to rapidly expand access to Early Childhood Development for children in emergencies and build the momentum needed to achieve the Sustainable Development Goals (SDGs). They unanimously called for closer collaboration and the leveraging of combined resources to mitigate the impact of conflict on babies and children.

Why invest in the early years?

The seeds for development and learning are sown during the first few years of life, when more than one million new neural connections are formed every second. Experiences during early childhood (ages 0-8/school entry) shape the very architecture of the developing brain, establishing the foundations for all later learning, behaviour and well-being. Investing in a child’s earliest years yields the highest economic returns (Heckman Curve); the rate of return on investing in early childhood programs can be about 13.7 per cent (UNICEF, 2017). Furthermore, “by intervening early and engaging with children’s families, ECD services offer a unique opportunity to make a cost effective and sustainable impact on interrupting cycles of poverty and violence” (Early Childhood Peace Consortium, 2018).

Risks resulting from lack of ECD services in emergencies

Of the 26 billion dollars spent each year on humanitarian responses, less than 3 per cent goes to education, and only a fraction of that goes to ECD. Funds, committed for ECD under humanitarian response plans, are often allocated in an uncoordinated or inconsistent way. In emergencies, and particularly in conflict-affected contexts, children are disproportionately represented. Young children and their caregivers in conflict contexts and forced displacement are especially vulnerable to a range of severe threats, including physical harm, psychological trauma and high levels of stress that can inhibit responsive care and healthy development. Still, beyond basic survival, the rights and needs of young children and their caregivers in crisis are persistently overlooked and underfunded.

Benefits of ECD services in emergencies

ECD services in humanitarian and fragile settings are increasingly recognized as essential to end preventable deaths of newborns and children under five, support healthy brain development in young children, and drive economic recovery and peacebuilding in children’s and parents’ communities and countries (UNICEF, 2019). ECD interventions including play-based learning, can provide immediate and long-term results for children affected by the trauma of conflict and displacement, as well as creating a springboard for improved development outcomes later in life. 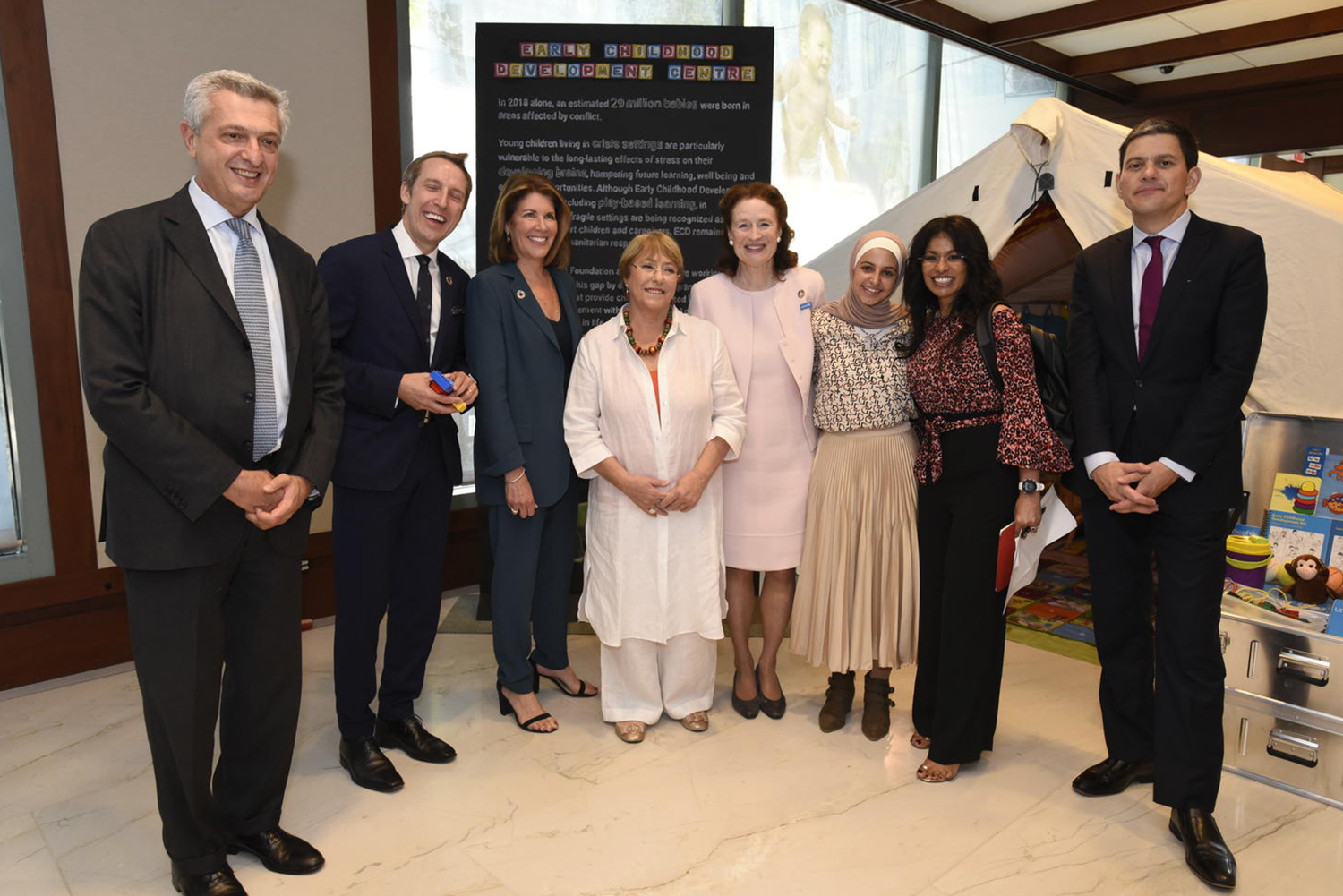 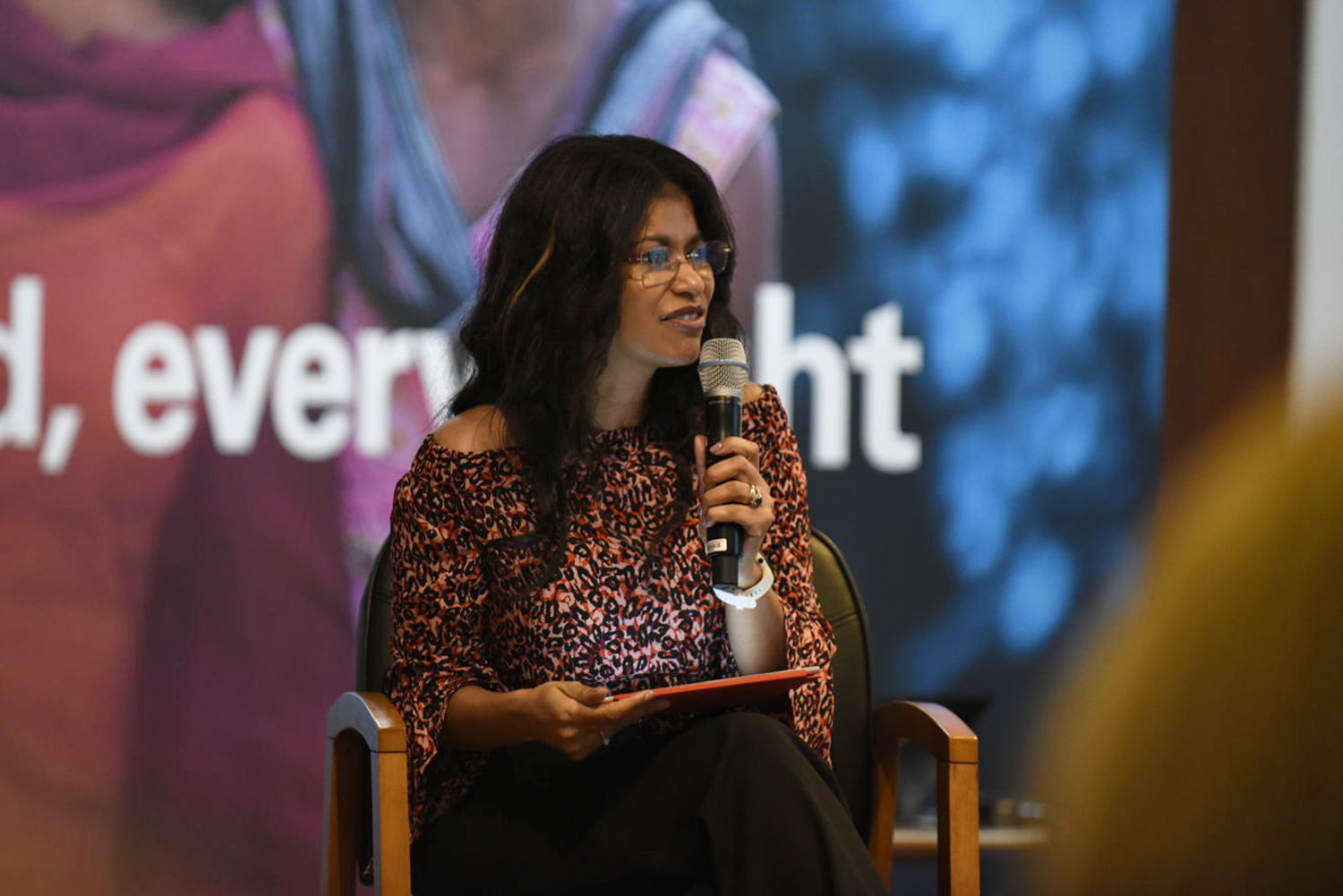 Event moderator, Ms Julie Gichuru welcomed audience members and introduced them to the panel of high-level speakers. She is the first African woman to receive the Martin Luther King Salute to Greatness for peace advocacy in Kenya (2007 and 2008). Ms Gichuru, recognized as a Young Global Leader under the World Economic Forum, drives African conversations on leadership and development via her celebrated broadcast media initiatives. 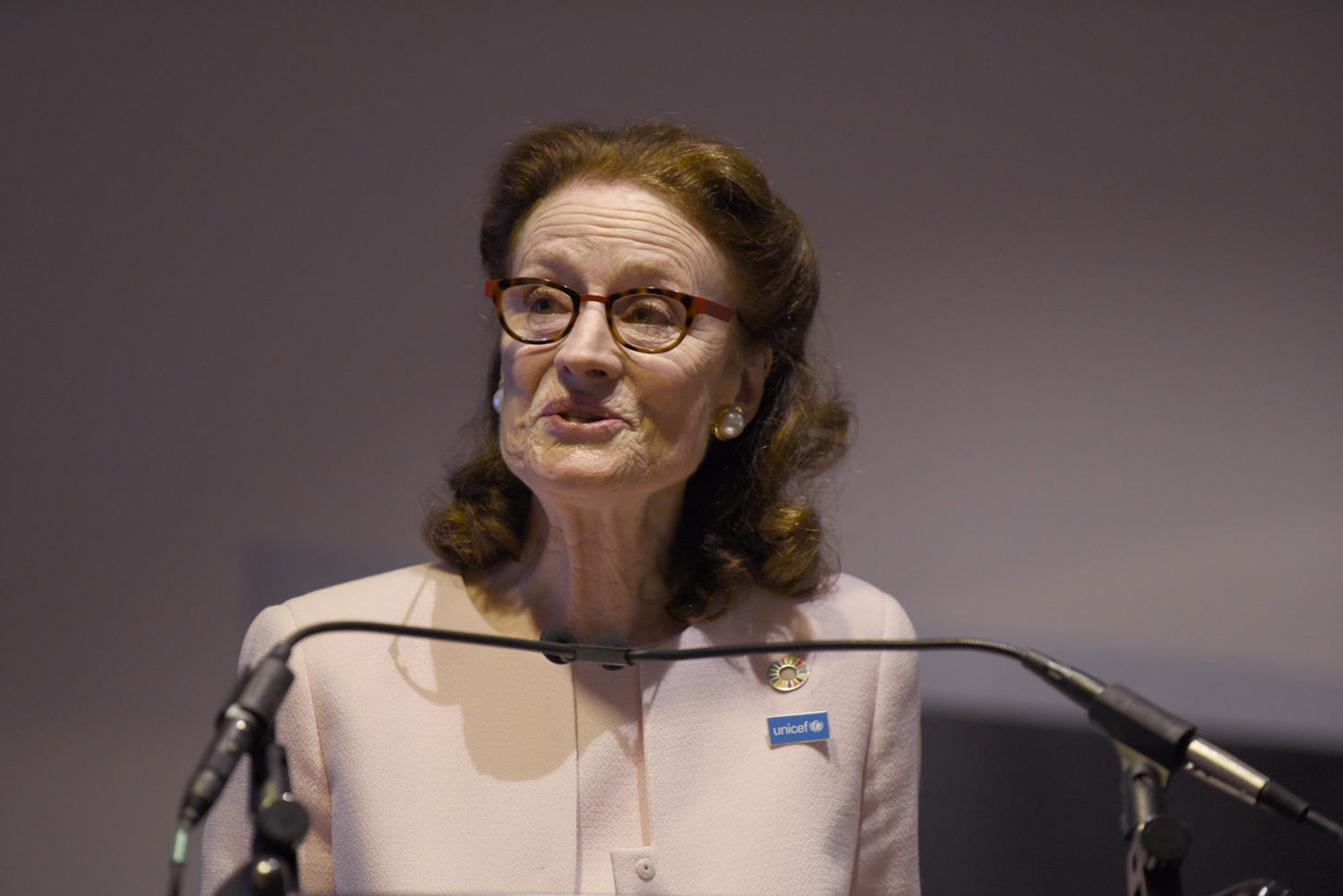 "Every country’s future depends on building the human capital of its youngest citizens."
- Henrietta Fore, Executive Director, UNICEF
More than 29 million babies were born into conflict-affected areas in 2018 – or more than one in five babies – was the sobering new statistic announced by UNICEF Executive Director, Henrietta Fore. She announced UNICEF would commit 10 percent of its education budget towards early childhood education in emergencies. She outlined the latest science that shows conflict not only risks children’s physical safety, but also affects their brain development. The repeated, prolonged exposure to traumatic events releases the hormone, cortisol – often known as the ‘fight or flight’ chemical. Too much cortisol can destroy vital neural connections and prevent new ones from forming, having devastating consequences on a child's developing brain.
She disclosed that UNICEF staff in Yemen, for example, report that some children, “shake with fear uncontrollably for hours on end…they don’t sleep and you can hear them whimpering. Others are so malnourished and traumatized they detach emotionally from the world and people around them, causing them to become vacant and making it impossible to interact with their families.” 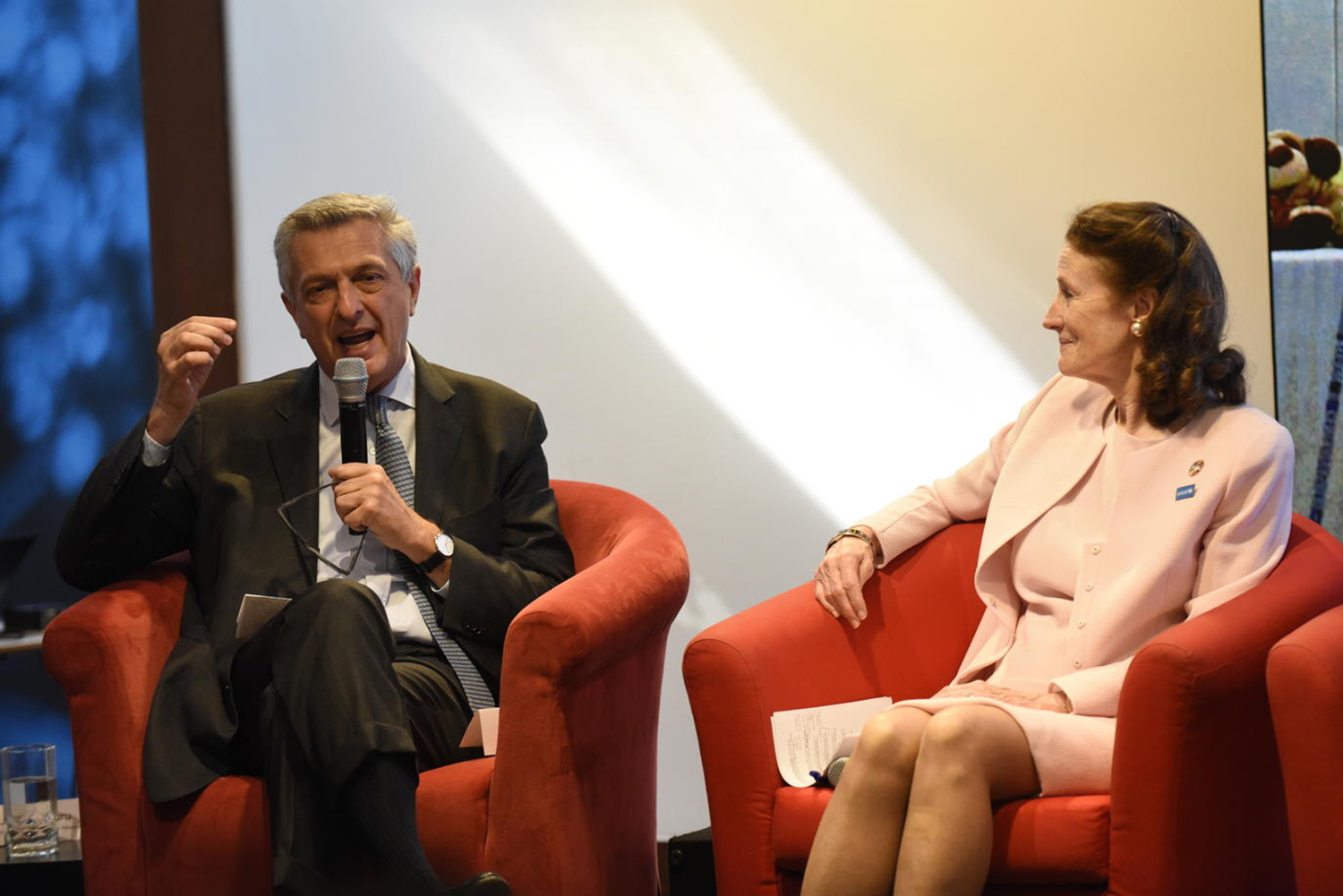 United Nations High Commissioner for Refugees, Filippo Grandi, urged partners to look at the broader elements of ECD in crisis, including the need for psychosocial support for both parents and children. “If we don’t address this, a generation of children will see crisis as the only mode of life and that’s extremely destabilising for the world,” he said. Last year alone, UNICEF provided 3.6 million children and caregivers with access to psychosocial support, and 6.9 million children with access to formal or non-formal education, including early learning. 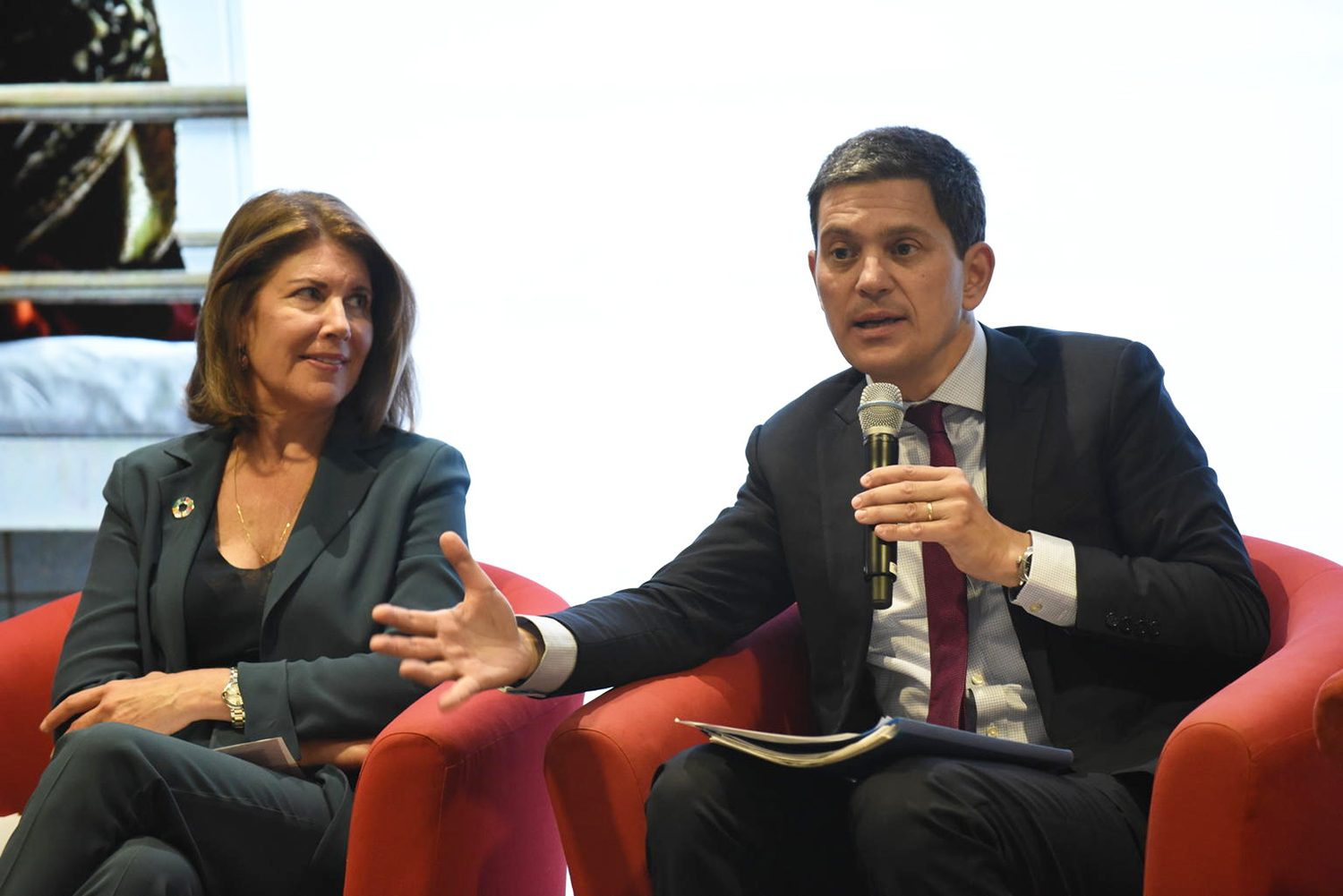 International Rescue Committee CEO, David Miliband, highlighted the gaps in funding early childhood through humanitarian response plans and called for more investment in evidence generation.
Sesame Workshop President of Social Impact and Philanthropy, Sherrie Westin, emphasized that the greatest return on investment, according to the evidence, is in the earliest years, when a child’s brain is developing faster than at any other time. She also highlighted the importance of innovative partnerships and the use of mass media to reach young children and families through both home and center-based interventions. 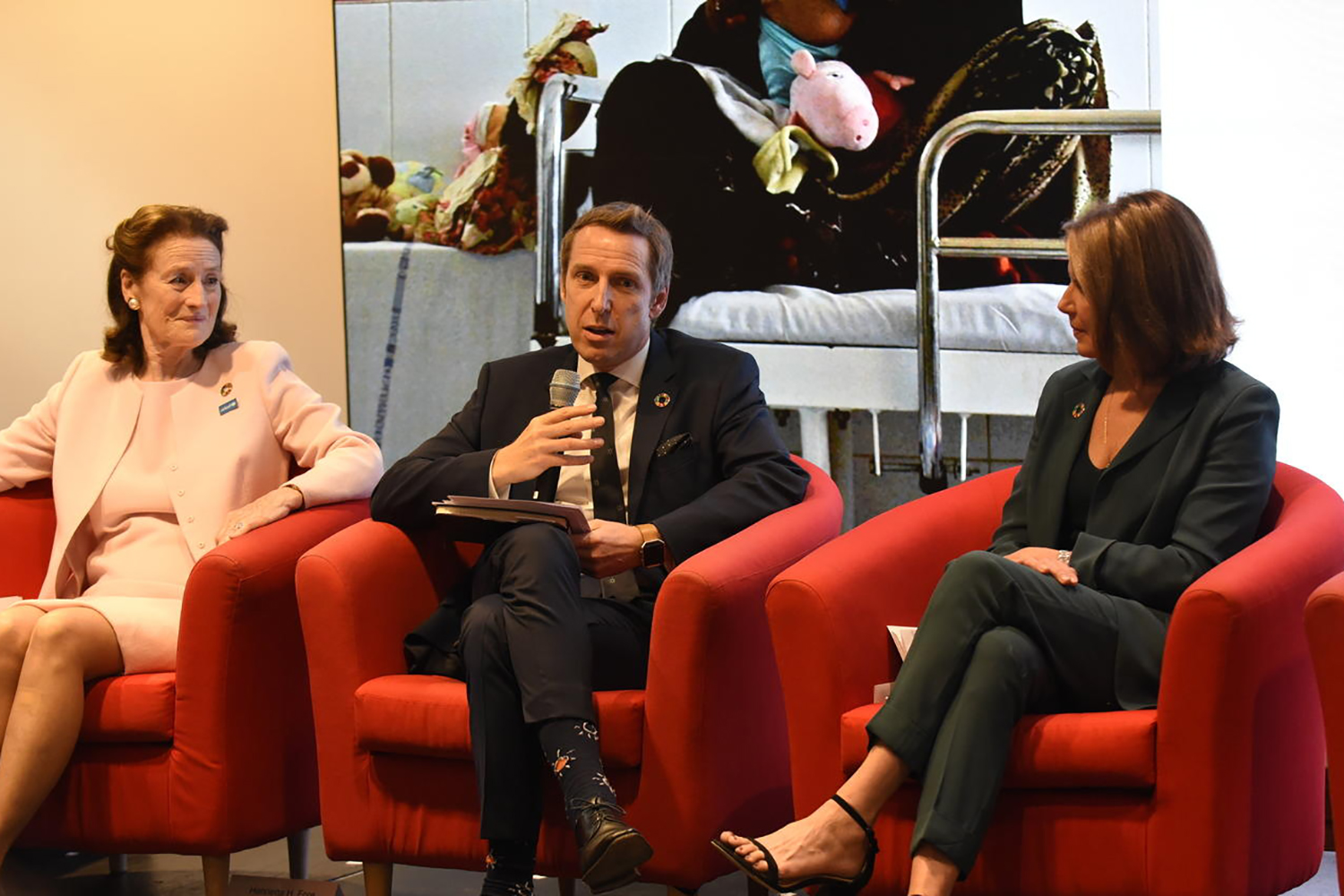 LEGO Foundation CEO, John Goodwin, highlighted the importance of learning through play to help children living in crisis contexts, using research to identify how to apply this approach in different settings and strongly encouraged other leaders in the sector to increase investment and support for early childhood. 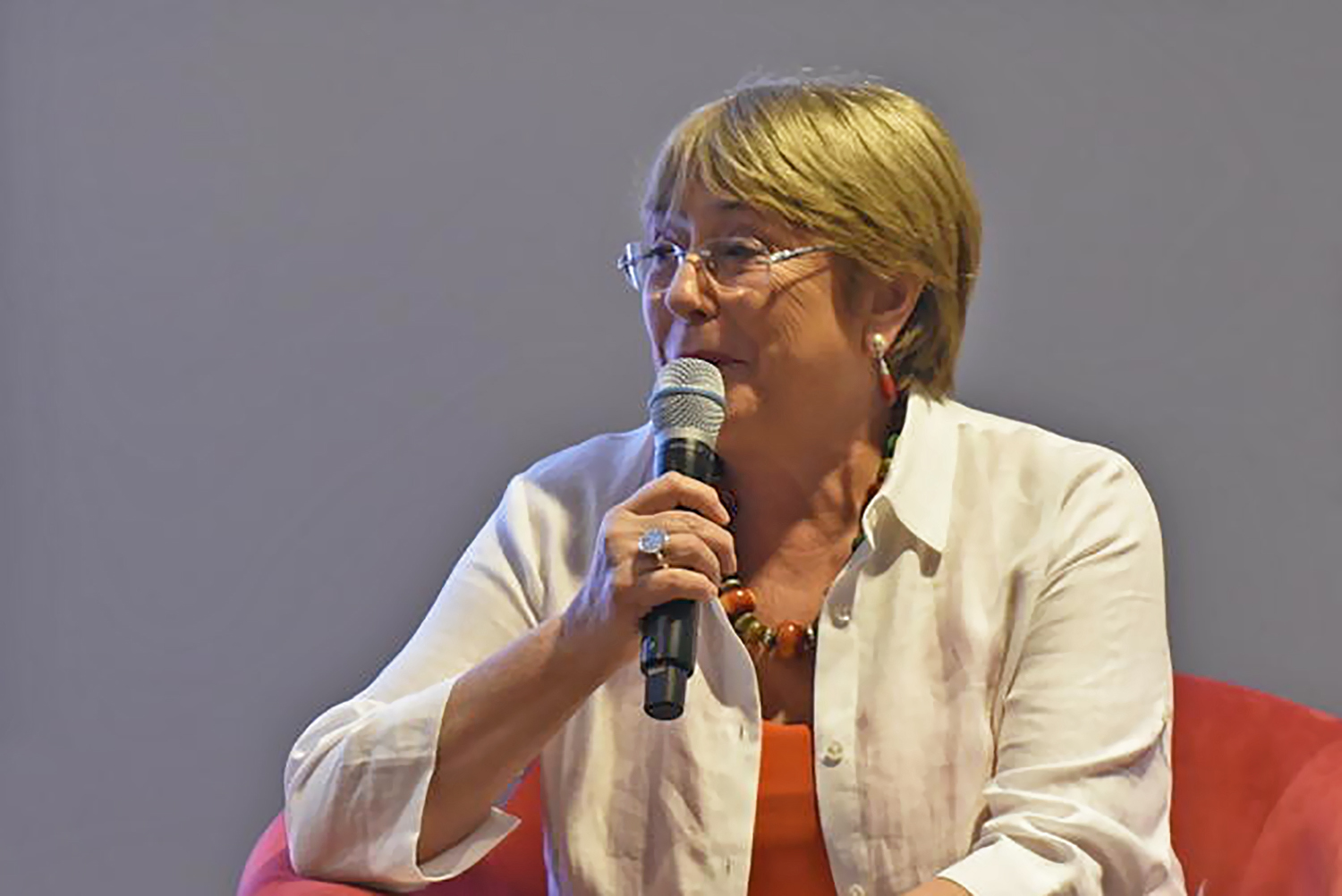 The United Nations High Commissioner for Human Rights, Michelle Bachelet, captured the mood of action and momentum in the room when she said, “The future of a child always starts today.” Ms. Bachelet also spoke about how her background as a physician had reinforced her belief in the transformative power of Early Childhood Development interventions. She emphasised that young children had the right to play, learn and develop. 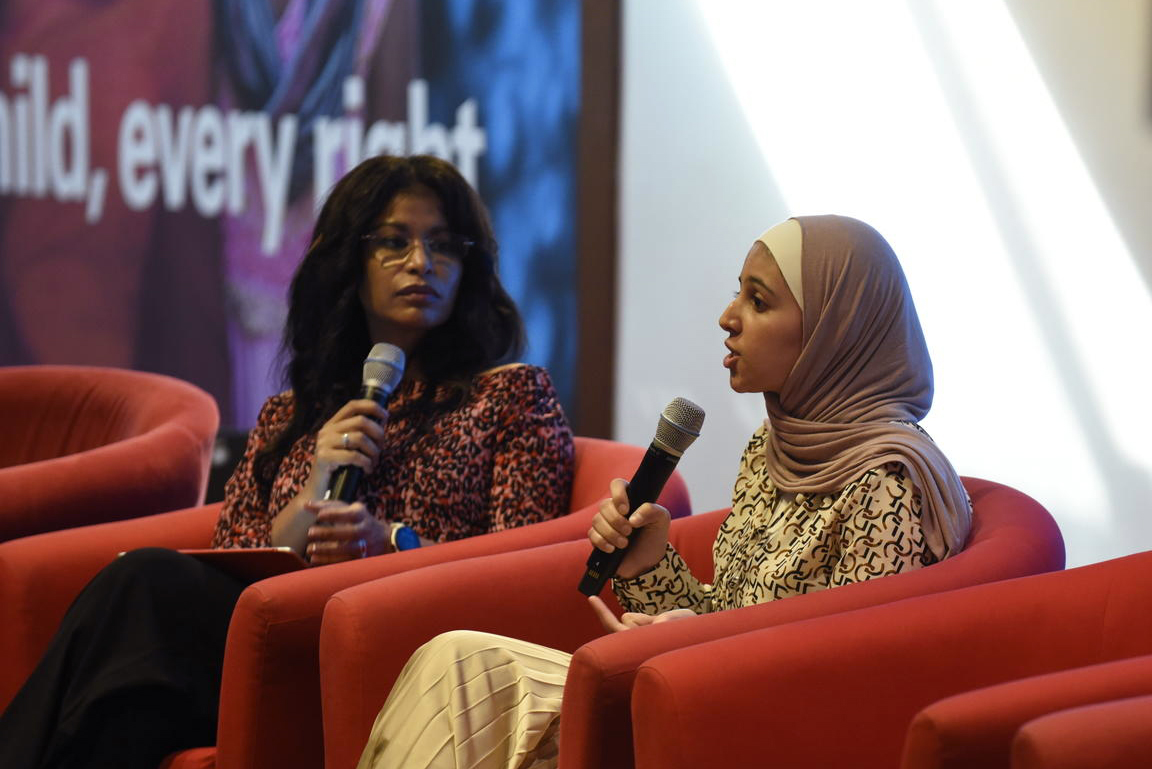 Finally, UNICEF Goodwill Ambassador, Muzoon Almellehan noted that partners were talking about the rights of children in conflict as the world prepared to commemorate the 30th anniversary of the Convention on the Rights of the Child. “Children need access to their rights, [to learning and play],” she said. “Support for these children gives them hope and a future, because when we have support, we have resources, and when we stand together, we can make a difference.”
Many participants joined the movement by making vocal and written commitments such as increasing advocacy, supporting research and mobilizing resources for ECD in emergencies. 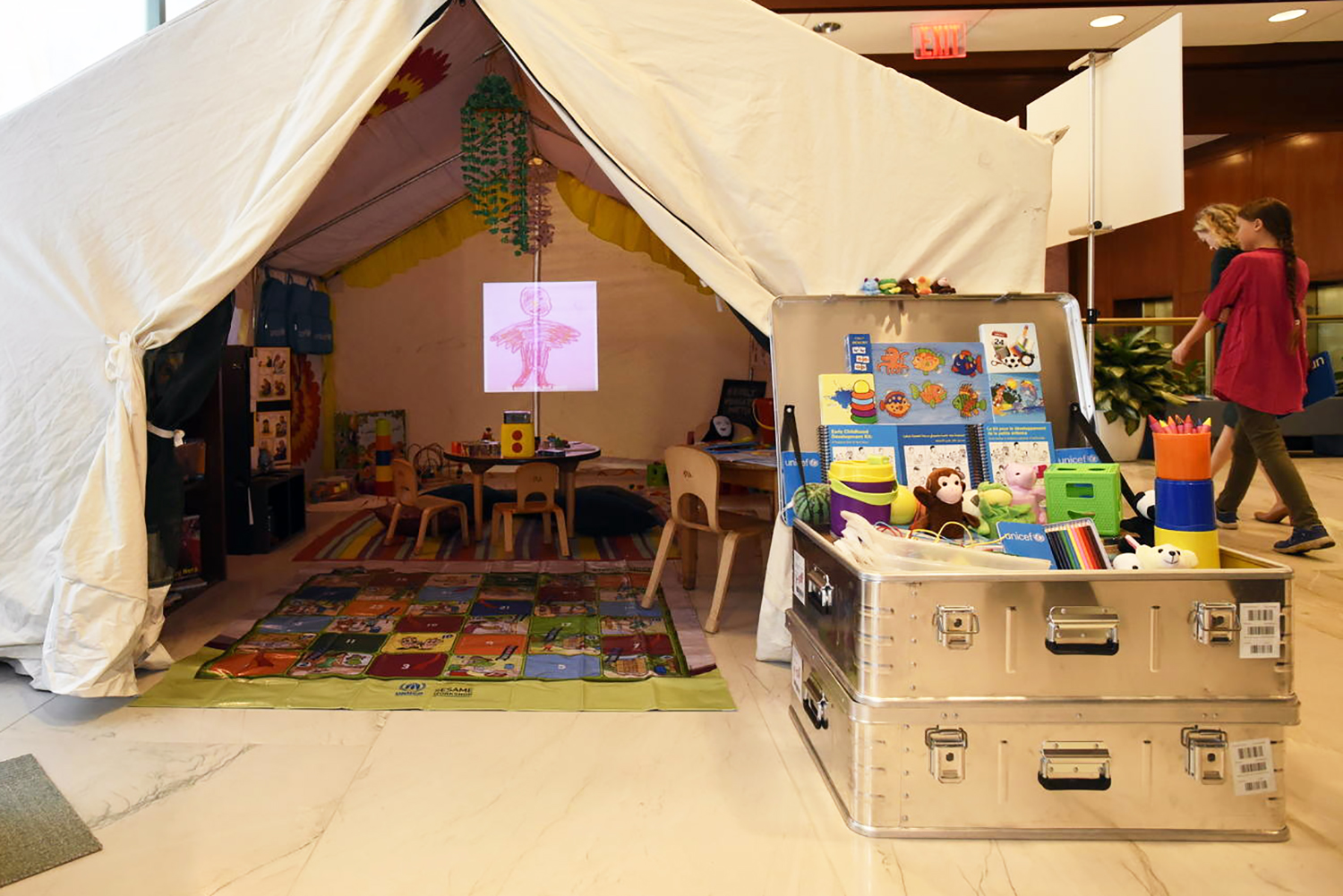 After the event, partners visited a model ECD center in the conference center foyer, displaying materials from the LEGO Foundation, Sesame Workshop, the International Rescue Committee (IRC), BRAC and UNICEF, used to support early learning and responsive caregiving through the transformative power of play.
The center included UNICEF ECD Kits for Emergencies, which give parents, caregivers and teachers information and learning tools to nurture children’s brains in crisis and low resource settings. Over the last decade, more than 7 million children have been reached with these kits, through 104 UNICEF Country Offices. The center also featured drawings from children in Yemen and Jordan who have been affected by conflict. It is evident that young children and their families need support and can benefit greatly when provided with tools for resilience, especially in emergency contexts. 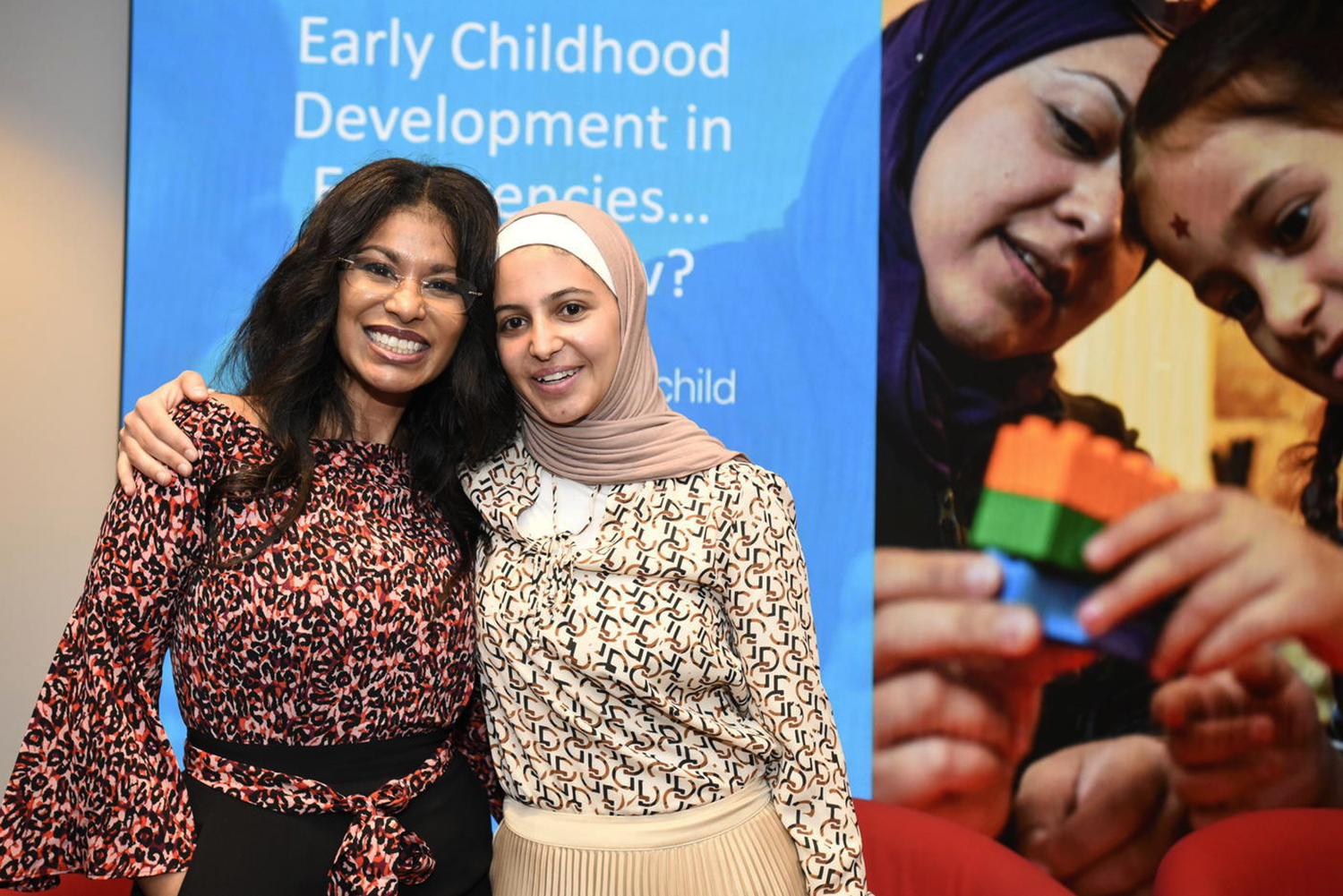 "Children need access to their rights, [to learning and play]. Support for these children gives them hope and a future, because when we have support, we have resources, and when we stand together, we can make a difference.” - Muzoon Almellehan, Goodwill Ambassador, UNICEF

Learn more about the General Assembly of the United Nations.