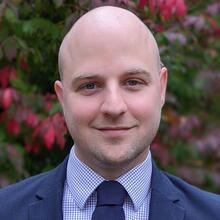 Title:
Research Communications Associate
Affiliation:
Yale Child Study Center
Curriculum Vitae
Michael
Michael M.
Michael McCarthy is currently a PhD student in Teaching and Curriculum at the University of Rochester’s Warner School of Education and Human Development.
Prior to joining the ECPC, Michael was a consultant for the Yale Center for Emotional Intelligence where he helped evaluate RULER, a SEL intervention, to determine its applicability to students with disabilities while also co-facilitating a systematic review.
During his time at the Warner School, Michael worked as a Research Assistant for the Motivation, Emotion, Disability, and Inclusion Lab where he conducted a systematic review that explored how students with disabilities are considered in studies of universal social and emotional learning (SEL) interventions in schools. Additionally, Michael was a Research Assistant for the Center on Disability and Education at the university where he co-facilitated a scope review that explores the state of higher education for students with ID.
Further, from 2011 to 2013, Michael worked as a Research Associate at the Yale Child Study Center in the field of early childhood development and education policy where he helped evaluate the quality of early childhood development in Uganda and Peru by conducting interviews with local and international NGOs, health, social protection, and education officers, as well as directors at the ministry and municipal levels. Also at Yale, Michael conducted a systematic review that examined parental, familial, and community support of children’s literacy interventions in low- and middle-income countries.
During the summer of 2012, Michael interned at the UNICEF Jordan Country Office based in Amman, Jordan working for the Chief of the Child Protection Program where he independently developed three consultancy reports that proposed frameworks for a new childhood law, outlined a monitoring body for childcare and disability institutions, and summarized the state of early childhood development in Jordan.
Michael earned a Bachelor’s degree from the University of Connecticut in History and a minor in Human Rights in 2010 and graduated from the University of Bridgeport’s Master’s program in Global Development and Peace where he concentrated in International Political Economy and Development, earning his degree in 2013.

“However bad life may seem, there is always something you can do, and succeed at. While there’s life, there is hope.”
Stephen Hawking