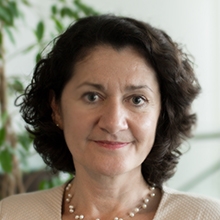 Liana Ghent is Executive Director of the International Step by Step Association (ISSA), a membership organization which serves as a learning community and a champion for quality and equity for all young children and their families. Since 2006, when she started at ISSA, under her leadership, the network has expanded to include over 70 member organizations from across Europe and Central Asia, engaging a dynamic mix of NGO’s, research centers, higher education and academic institutions. All ISSA members work to ensure the best quality care and education for young children, especially the most vulnerable, and together reach more than one million children.

Liana Ghent has more than 20 years of leadership experience in the nonprofit sector, primarily with programs in higher education and in early childhood development. Her leadership experience includes being regional director and later co-president of the Civic Education Project, a nonprofit organization engaged in higher education initiatives in Central and Eastern Europe and the former Soviet Union. Before joining ISSA, she worked with the Open Society Foundation’s Higher Education Support Program.

"There can be no keener revelation of a society's soul than the way in which it treats its children. Education is the most powerful weapon which you can use to change the world."
- Nelson Mandela (1918–2013)