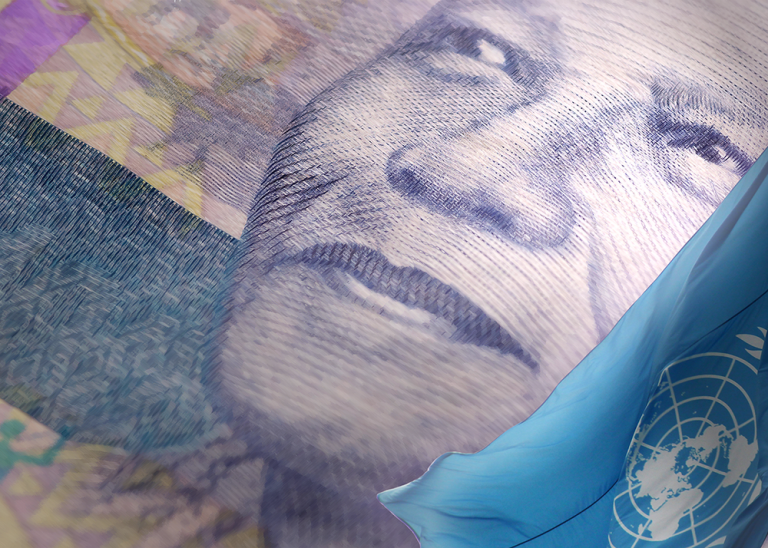 “There can be no keener revelation of a society’s soul than the way in which it treats its children. ” —Nelson Mandela (1918–2013)
Yesterday, I was privileged to attend the Nelson Mandela Peace Summit at the United Nations. The focus was on how we need to take action to achieve Global Peace. This high-level forum was organized to honor of the centenary of Nelson Mandela’s birth. We know that Mandela, or Madiba as he was known by his friends, was an activist who dedicated his life to the betterment of humanity - to end conflicts and racial divides, and to protect the human rights for all, especially children and families living in poverty and other vulnerable settings. The speakers repeatedly reminded us of Mandela’s many admirable traits – his humility, his unwavering determination, his capacity for compassion and forgiveness, and his ability to communicate effectively with virtually everyone - whether they agreed with him or not.
Sadly, today there is an increasing number of children that are refugees from fragile states and conflict-affected countries. The UN Refugee Agency estimates that more than 50% of the 68.5 million displaced people around the globe are children many of whom are under 5 years of age. These realities often disrupt the capacity of caregivers, families and communities to protect and provide the nurturing care that is needed for children to thrive. Science tells us that the accumulation of adversities such as extreme poverty, inadequate nutrition, family and societal conflict and psychosocial stress can have direct effects on the development of a child’s brain and their future cognitive and socioemotional potential. We are also beginning to understand the biological basis of the negative transgenerational impact of early adversity through epigenetic mechanisms.  Fortunately, we also know that investing in early child development can have many positive returns including the child’s mental and physical health, and their future educational attainment, as well as lower rates of violent behaviors, addiction and poverty. Positive parenting can beget positive parenting for the next generation.
Mandela was right.
I will be traveling to Japan in a few days to give a presentation on the transformative power of early child development programs to build a more peaceful world. While I am confident that my talk will be well received by friends and colleagues, I know that we need to more to communicate effectively with policy-makers and the public at large. This is one of the core goals of the Early Childhood Peace Consortium and this interactive website. As you will see, if you take a closer look at the content of this website, we have developed policy briefs for policy-makers, which including the latest, Contributions of Early Childhood Development Services to Preventing Violent Conflict and Sustaining Peace. We are also working with our partners at UNICEF (Pia Britto and Fritz Friedrich, among others), Queen’s University (Paul Connolly, Laura Dunne, and Sarah Miller) and the Early Years Organization (Siobhan Fitzpatrick) that are both based in Belfast as well as with distinguished colleagues at Harvard (Phuong Pham and Patrick Vinck) and New York University (Hiro Yoshikawa and Larry Aber) to develop and test a Theory of Change as well as pilot early child development programs in six low and middle income countries designed to help build social cohesion in families and communities.
If you have any ideas how we can do a better job communicating, please we let us know. The best contacts are Rima Salah (who serves as the Chair of the Early Childhood Peace Consortium) as well as the Nancy Shemrah Fallon and Franz Joseph Hartl who have devoted a great deal of time and energy to developing this website. To reach them, submit your comment or query via our contact form.
Returning to yesterday’s event, it is abundantly clear that we need to interconnect as directly as possible with the many programs and individuals as possible and to develop effective partnerships to communicate effectively and act together despite the siloed nature of today’s world.
Let us all become global citizens and activists!

James F. Leckman, M.D., Ph.D., is Neison Harris Professor in the Child Study Center and Professor of Pediatrics at the Yale School of Medicine.