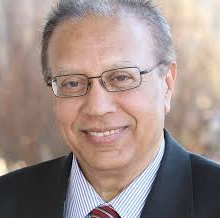 H.E. Ambassador Anwarul K. Chowdhury has devoted many years as an inspirational champion for sustainable peace and development and ardently advancing the cause of the global movement for the culture of peace that has energized civil society all over the world.

As a career diplomat, Permanent Representative to United Nations, President of the UN Security Council, President of UNICEF Board, UN Under-Secretary-General, the Senior Special Advisor to the UN General Assembly President, and recipient of the U Thant Peace Award, UNESCO Gandhi Gold Medal for Culture of Peace, Spirit of the UN Award and University of Massachusetts Boston Chancellor’s Medal for Global Leadership for Peace, Ambassador Chowdhury has a wealth of experience in the critical issues of our time - peace, sustainable development, and human rights.
Ambassador Chowdhury’s legacy and leadership in advancing the best interest of the global community are boldly imprinted in his pioneering initiative in March 2000 as the President of the Security Council that achieved the political and conceptual breakthrough leading to the adoption of the groundbreaking UN Security Council Resolution 1325 in which the Council recognized for the first time the role and contribution of women in the area of peace and security.
Equally pioneering are his initiatives at the United Nations General Assembly in 1999 for adoption of the landmark Declaration and Programme of Action on a Culture of Peace and in 1998 for the proclamation of the “International Decade for Culture of Peace and Nonviolence for the Children of the World (2001-2010)”.
He served as Ambassador and Permanent Representative of Bangladesh to the United Nations in New York from 1996 to 2001 and as the Under-Secretary-General and High Representative of the United Nations, responsible for the most vulnerable countries of the world from 2002 to 2007.
In March 2003, the Soka University of Tokyo, Japan conferred to Ambassador Chowdhury an Honorary Doctorate for his work on women’s issues, child rights and culture of peace as well as for the strengthening of the United Nations. In May 2012, he received a Doctor of Humane Letters honoris causa degree from the Saint Peter’s University of the United States.
Ambassador Chowdhury is a member of the Advisory Council of IMPACT Leadership 21 and is the first recipient of the IMPACT Leadership 21’s Global Summit Frederick Douglass Award Honoring Men Who Are Champions For Women’s Advancement in October 2013.
He is a member of the UN High Level Advisory Group for the Global Study on the 15-year implementation of Security Council resolution 1325 (2000) and also one of the 12-member Asia-Pacific Regional Advisory Group on Women, Peace and Security hosted in Bangkok.
He has been the Chair of the International Drafting Committee on the Human Right to Peace; an initiative coordinated from Geneva and was a founding member of the Board of Trustees of the New York City Peace Museum.
Ambassador Chowdhury is the Founder of the New York-based  Global Movement for The Culture of Peace.
He is a founding Co-Chair of the International Ecological Safety Collaborative Organisation (IESCO) with headquarters in China and is a member of the Advisory Council of the National Peace Academy in US.
He is the Honorary Chair of the International Day of Peace NGO Committee at the UN, New York and Chairman of the Global Forum on Human Settlements, both since 2008. He has been a part of the 12-member Wisdom Council of the Summer of Peace for the years 2012, 2013 and 2014, a world-wide participatory initiative to advance the Culture of Peace.
He has been decorated by the Government of Burkina Faso in West Africa with the country’s highest honour “L’Ordre National” in 2007 in Ouagadougou for his championship of the cause of the most vulnerable countries.
Amb. Chowdhury has structured curricula and taught courses on “The Culture of Peace” at the Soka University of America and the City University of New York in 2008 and 2009. He also served as an Adjunct Professor at the School of Diplomacy, Seton Hall University of the United States.
He is a Patron of the Committee on Teaching About the UN (CTAUN), New York. He is the Chair of the Jury of the Peace in the Streets Global Film Festival (PSGFF) and member of the Advisory Board of the Orlando-based Global Peace Film Festival (GPFF).
Public speaking and advocacy for sustainable peace and global citizenship keep him engaged at the present time.
"If we desire peace, we must build a culture of peace across the world that embraces humanity's oneness."
H.E. Ambassador Anwarul K. Chowdhury, Former Secretary-General of the United Nations as Under-Secretary-General and Founder of the Global Movement for The Culture of Peace