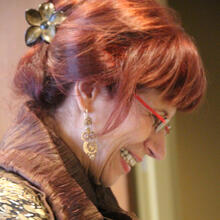 Hanifa Mezoui, PhD, has enjoyed a distinguished career with the United Nations for the past 28 years. In the last ten of those years, she has been Chief of the NGO Section of the Department of Economic and Social Affairs where she has established an impressive record of accomplishments.

The Informal Regional NGO network (UN-NGO-IRENE) was developed under her guidance as a critical channel for communicating key programs between the UN and the NGO community, including marginalized groups in developing countries.

From September 2011 to September 2012 she joined the Office of the President of the Sixty Six General Assembly as the Special Coordinator for the Third Committee and Civil Society.

Ms. Hanifa Mezoui holds a Doctorate in French Linguistics, an MA in French Literature, an MA in applied Linguistics and an MA in Business Administration from the University of Aix-en-Provence, France.

Presently she is a Senior Advisor to the UNAOC High Representative in charge of Humanitarian Affairs and Civil Society.

"Our world is a great, yet complex thing. To leave it to a generation which is unprepared, and unequipped with the proper principles and ethics, would be hazardous. Hence, instilling values of harmony and tolerance in our children through instruments of early education is vital for a peaceful future. The time for change is NOW. Let us benefit from today, for a better tomorrow."
H.E. Mr. Nassir Abdulaziz Al-Nasser the United Nations High Representative for the Alliance of Civilizations