Home » Calendar » WEBINAR | Beyond the blast: Rebuilding healthcare in Lebanon

WEBINAR | Beyond the blast: Rebuilding healthcare in Lebanon 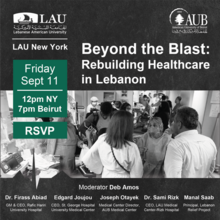 Beirut’s devastating August 4 explosion hit Lebanon’s healthcare particularly hard. The system was already struggling amid political and economic crises, the impact of COVID-19, and millions of dollars of unpaid fees by the Lebanese government. With the nation in lockdown and limited access to dollars, hospitals were warning of shortages of critical medical supplies and stopped performing nonessential surgeries while closing down entire wings, problems only exacerbated by widespread electricity blackouts.
August 4 pushed the system to the breaking point, killing at least 200 people and injuring thousands more, destroying supplies and critical infrastructure, leaving thousands homeless, and hitting the economy with billions in damages. Lebanon’s healthcare workers have been heroes, working around the clock in poor conditions. But they need our support.
On September 11 at noon New York / 7pm Beirut time, Deb Amos, NPR, will join the heads of Lebanese American University Medical Center, American University of Beirut Medical Center, St. George Hospital University Medical Center, and Rafic Hariri University Hospital. They will discuss the state of Lebanon’s healthcare sector and how they are responding in the wake of the explosion. We urge you not only to LISTEN, but to ACT in any way you can to SUPPORT these institutions. We are encouraging direct DONATIONS to these hospitals, or any organization of your choice aiding in the response to the blast.