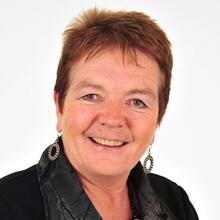 Siobhán Fitzpatrick, CBE, MBA, MSSC, CQSW, BSc., is Chairperson of the International Network on Peace Building for Young Children, and former Chief Executive Officer of Early Years – the organization for young children and had been in the post since 1989, having worked previously for Health and Social Services in Northern Ireland.

The  Early Years organization supports 40,000 children and families and provides support, training and quality assurance for 12,000 staff in the early years sector across Northern Ireland. In her role as Chief Executive Officer, Siobhán exercised responsibility for policy and strategic development, relationships with the Stakeholder Group on Early Years, Childcare Partnerships and Pre-school Education Advisory Groups. She managed cross border relationships and international partnerships.

She is a member of the Early Years Strategy Group in the Republic of Ireland, a member of the Transatlantic Forum on Inclusive Early Education for children from low income and migrant backgrounds, and an active member of the Global Implementation Science Initiative sponsored by the Centre for Effective Services.

Siobhán was the European representative on the World Forum Foundation for Early Years Care and Education from 2001 to 2009 and President of ISSA, the International Step by Step Association for Eastern Europe and the former CIS countries (2006-2011). She currently chairs the International Network on Peace Building with Young Children which is bringing the learning from the work in Early Years on inclusion, respecting difference and peace building to areas affected by conflict around the world. There are 20 countries represented on the Network and it is linked to the six International Early Childhood Networks in the world (Consultative Group, Latin America Early Childhood Network, ARNEC, ISSA, The African Early Childhood Network, the Arab Collective).

Siobhán acts as Chief Executive of HighScope Ireland and chairs an all Ireland Cross Border Project Management Group with the Border Counties Childcare Network which is implementing a Cross Border Early Years Management and Leadership program, a special needs program for early years staff and a Respecting Difference Program.

Siobhán was appointed by the Secretary of State and the Tánaiste in the Republic of Ireland as a Board member to the International Fund for Ireland which aims to support reconciliation and regeneration in Northern Ireland and the Republic of Ireland. She has been a member of the Board of the International Fund for Ireland since 2012.

Siobhán has extensive experience in strategic planning in relation to the development of services for young children, especially those living in vulnerable environments. She has led a 10 year multi million pound program of investment supported by the Atlantic Philanthropies aimed at improving long-term outcomes for young children. She had responsibility for developing and overseeing the implementation of two large random control trials which showed significant impact on improving outcomes in relation to social and emotional well-being, inclusion and eagerness and dispositions to learning. She is currently leading an organizational wide approach to Participatory Evaluation which aims to use a mix of qualitative and quantitative methodologies to capture improvements in outcomes. Siobhán plays lead and accountable body status for 10 SureStart projects, supporting the optimum development of 10,000 young children and their families. She is currently leading a new £3million Pathway Fund aimed at improving outcomes for children and Families for young children.

Siobhán has implemented an organizational wide program in relation to the implementation of the rights of young children linking this to the recommendations for General Comment No 7.

Siobhán was awarded a CBE for services to Education, Family Support and Community Development in the Queen’s Birthday Honors in 2010.

Publications include ‘From Conflict to Peace Building’, ‘The Power of Early Childhood Services’, ‘Education and Social Change, the International Journal of Early Education’. She has been responsible for the development of a new Masters Program in Applied Peace Building and Early Education in partnership with the INCORE at the University of Ulster.

In 2017, Siobhan was awarded the Lifetime Leadership Award by the Chief Officers for the Third Sector in Northern Ireland.

Siobhan has been a co-founder member of ECPC since 2013.

"The true measure of a community’s standing is how well it attends to its children: their health and safety, their material security, their education, and sense of being loved, valued, and included in the families and communities into which they are born."
- UNICEF (2007)