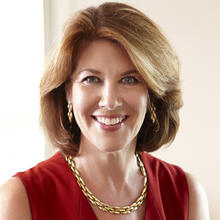 Westin spearheaded a partnership with the International Rescue Committee to bring critical early education to children in the Syrian response region, which was awarded the MacArthur Foundation’s first ever $100 million grant, creating the largest early childhood intervention in the history of humanitarian response. This work has expanded to reach children affected by crisis in Bangladesh, East Africa, Latin America, and how those who have been forcibly displaced from Afghanistan and Ukraine.
Westin has held leadership positions in media, nonprofit, and public service.  She was Assistant to the President for Public Liaison and Intergovernmental Affairs for President George H.W. Bush, Assistant Secretary for Public Affairs at the U.S. Department of Housing and Urban Development, and held senior positions at the ABC Television Network and U.S. News & World Report.
Westin was named a “Leading Global Thinker” by Foreign Policy Magazine, one of Fast Company’s “100 Most Creative People in Business”, was also recognized with the Smithsonian’s “American Ingenuity Award” and the The Thomas Jefferson Medal for Citizen Leadership.  A staunch advocate for addressing children’s needs, she regularly appears on major media outlets to highlight the value of investing in early childhood development, especially for the most vulnerable children.
Westin is Chair of the Joan Ganz Cooney Center, an independent research and innovation lab named for Sesame Street’s founder, and serves on the boards of directors of the U.S. Global Leadership Coalition, Communities in Schools, and Vital Voices Global Partnership.  She is a member of the Council on Foreign Relations, the U.S. Afghan Women’s Council, and the Early Childhood Peace Consortium Advisory Board.
Westin is a graduate of the University of Virginia and holds an Honorary Doctorate from Concordia College in New York.

“No one is born hating another person because of the color of his skin, or his background, or his religion. People must learn to hate, and if they can learn to hate, they can be taught to love, for love comes more naturally to the human heart than its opposite.”
Nelson R. Mandela, Former President of South Africa