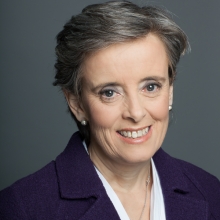 Marta Santos Pais, J.D., was appointed as Special Representative of the Secretary-General on Violence against Children (SRSG) on May 1st, 2009, and took up her position on September 1st, 2009.

As a high level global independent advocate, Marta Santos Pais promotes the prevention and elimination of all forms of violence against children in the justice setting, in the home, in institutional care, in schools, in the workplace and in the community. She acts as a bridge builder in all regions, and across sectors and settings where violence against children may occur.

Since her appointment, she has been strongly committed to mobilizing action and political support to maintain momentum around this agenda and to achieve steady progress across the world. Marta Santos Pais has more than 30 years experience on human rights issues, engagement in United Nations and intergovernmental processes. She is the author of a large number of publications on human rights and children’s rights.

Before her appointment as SRSG on Violence against Children, Marta Santos Pais was the Director of the UNICEF Innocenti Research Centre, a position she held since 2001. She joined UNICEF in 1997 as Director of Evaluation, Policy and Planning. Previously, she was the Rapporteur of the Committee on the Rights of the Child and Vice-Chair of the Coordinating Committee on Childhood Policies of the Council of Europe. She was a Special Adviser to the UN Study on Violence against Children and to the Machel Study on the Impact of Armed Conflict on Children. She was also a member of the UN Drafting Group of the 1989 Convention on the Rights of the Child and of its Optional Protocols and participated in the development of other key international human rights standards.

Publications launched by the office of the Special Representative of the United Nations Secretary-General on Violence against Children:

"Protecting children from violence is a human rights imperative, a question of good governance and also of good economics. But violence will only become part of a distant past when the values, goals and targets of the new sustainable development agenda will be translated into tangible national action."
Marta Santos Pais, Special Representative to the Secretary-General on Violence against Children