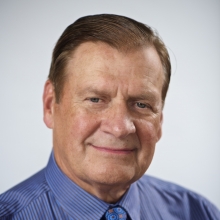 ECPC:
Emeritus Member
Title:
Clinical Professor of Child Psychiatry and Nursing
Affiliation:
Supporting Father Involvement
Curriculum Vitae
Kyle D. Pruett, M.D., is a Clinical Professor of Child Psychiatry at the Yale School of Medicine, and a founding member of the Early Childhood Peace Consortium (ECPC). He is a prominent author, international lecturer, media personality and pioneering researcher, conducting the country’s only long-term study of the impact on children of primary caretaking fathers. Author of several award-winning books, he has also been a columnist for Good Housekeeping and Child magazines. He hosted his own Lifetime Television series, Your Child Six to Twelve with Dr. Kyle Pruett, and was chosen by Oprah Winfrey to host her award-winning video, Begin With Love, and by Peter Jennings to appear with him on the Children’s Town Meetings after 9-11.
Dr. Pruett appears frequently in the New York Times, on National Public Radio and Television, Good Morning America, CBS News. and the Today Show. He has hosted award-winning DVDs for the National Fatherhood Initiative, Reading is Fundamental, I Am Your Child Foundation, and the Goddard Schools. An acclaimed speaker and teacher, he has addressed the National Press Club, educated judges, lawyers, business leaders and physicians in many states, and advised dozens of legislators at the state and federal level. He consulted with Vice President Al Gore on several of the White House ‘Family Reunions’, is past-president of Zero to Three: The National Center for Infants, Toddlers and their Families, and a past member of the Sesame Workshop Board of Directors. Dr. Pruett is featured in the award-winning Zero to Three Podcast series ‘Little Kids, Big Questions’.
Educated in public schools, Yale and Tufts Universities, he is an internationally known expert and forensic consultant on child, parental and family development, paternal involvement, children’s mental health, creativity, and the effects of media, trauma, and divorce on children. He maintains a practice in infant, child and family psychiatry. He was Visiting Professor at University of Calgary, Alberta in 2012. Dr. Pruett is a member of the Yale Global Health Initiative, and of the Early Childhood Peace Consortium with recent presentations in Istanbul, Marrakech, Florence, and the UN/UNICEF in New York and a consultant to the Salama bint Hamdan Foundation, Abu Dhabi, UAE. A member of the Performing Arts Medicine Association, Dr. Pruett is also a gifted musician and regularly performs as a soloist in opera, oratorio and vocal chamber music. He is father to three daughters and one son, grandfather of four, and is married to Dr. Marsha Kline Pruett, the Maconda Brown Professor of Psychology and Social Work at Smith College.

Supporting Father Involvement (SFI): In contrast to current public discussion of father involvement, which assumes that men’s family involvement is a matter of having appropriate family values and motivation, the SFI Program is based on an empirically-supported family systems model of the central factors associated with fathers’ family involvement, and on a belief that most fathers wish to be positively involved in their children’s lives.

Zero to Three: The National Center for Infants, Toddlers and Families Zero to Three is the nation’s leading resource on the first three years of life. A national non-profit charitable organization, its aim is to strengthen and support families, practitioners and communities to promote the healthy development of babies and toddlers. Worth magazine recently listed it as one of the top 100 charities in the nation. Dr. Pruett is a past president of the organization, having served as a board member since 1984.

Sesame Workshop the non-profit educational organization behind Sesame Street and so much more… Sesame Workshop is a nonprofit educational organization making a meaningful difference in the lives of children worldwide by addressing their critical developmental needs. The Workshop develops innovative and engaging educational content for television, radio, books, magazines, interactive media and outreach. Taking advantage of all forms of media and using those that are best suited to delivering a particular curriculum, the Workshop effectively and efficiently reaches millions of children, parents, caregivers and educators - locally, nationally and globally.

The Yale Child Study Center founded in 1909, The Yale Child Study Center is the nation’s leading research, education, and service center for child development and child psychiatry. The center has originated many national and international intervention and research efforts on behalf of seriously ill and at-risk children and serves as the Division of Child and Adolescent Psychiatry at the Yale University School of Medicine. Dr. Pruett has been a faculty member since 1974 and is the Director of Education and Training.

Your Divorce Advisor ”A Lawyer and Psychologist Guide You Through the Legal and Emotional Landscape of Divorce”. This book is coauthored by Diane Mercer, Esq. and Marsha Kline Pruett, Ph.D, M.S.L.. Dr. Marsha Kline Pruett is Dr. Kyle Pruett’s wife and research collaborator.

"This is not work for the weak. This is work for the courageous. The appetite for peace is part of human nature."
Kyle D. Pruett, M.D.,Clinical Professor in the Child Study Center, Clin Prof Psychiatry,and Sch of Nursing, Yale University