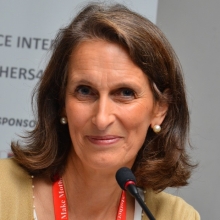 ECPC:
Advisory Board Member
Title:
President
Affiliation:
Make Mothers Matter (MMM)
Make Mothers Matter
Make Mothers Matter
Make Mothers Matter
Anne-Claire de Liedekerke is President of Make Mothers Matter (MMM), an international organisation that for the past seventy years has been placing mothers - the first educators of their children alongside fathers - at the heart of its mission, advocating for and supporting them as change makers for a better world.
She firmly believes in recognizing motherhood as a determinant factor in the development of a culture of peace and for the progress of modern society. Anne-Claire leads teams of representatives at the United Nations in New York, Geneva and Vienna; at the UNESCO in Paris; and at the European Union in Brussels. MMM federates and gives a voice to mothers globally in the four main areas of peace, education, health and the economy.
Through MMM’s advocacy work and an expanding network of grassroots organisations working in the field with and for mothers, advocacy actions taken in the UN, European Union and UNESCO have influenced laws and measures directly benefiting mothers and families in their everyday life, and through them, the whole of society.
Anne-Claire joined MMM in 2008, heading the Delegation at the European Union, leading two major EU- funded research programs Family Platform and Dorian, and a major Survey about the well being of mothers in the EU.
Anne-Claire holds a Master Degree in Art History from UCLouvain Belgium, and has been active in the cultural world throughout years of expatriation with her family in the United States and Canada.